FIDI: A tiny board for super-fast prototyping with CircuitPython 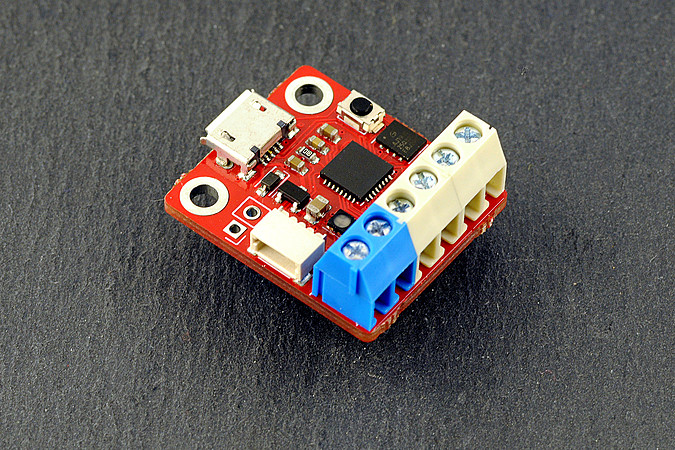 FIDI is a small development board running Adafruit's CircuitPython, featuring 6 terminal block connectors and a qwiic connector, designed for fast prototyping. It runs on the ATSAMD21 microcontroller, a 32-bit Arm Cortex M0+ clocked at 48Mhz, as found on many popular Arduino-compatible boards.

Though FIDI only features 6 GPIOs, they can be configured as digital or analog IOs, SPI, I2C, UART, or a combination thereof. Four of those GPIOs are available through terminal block connectors, allowing connections with a simple screwdriver. The two remaining GPIOs are available on a four-pin JST-SH connector, in an arrangement that is fully compatible with Sparkfun's qwiic connector system (also called STEMMA QT by Adafruit). This allows you to quickly test sensors and other circuits without any soldering.

Thanks to CircuitPython, writing code for FIDI is super simple. Once connected to a computer with a simple USB micro connector, FIDI shows up as a USB drive where you can drag-and-drop or edit your python code.

FIDI is open-source hardware. In fact, it's a derivative of Arturo182's excellent SERPENTE. The main difference between SERPENTE and FIDI is the connectivity, with FIDI featuring Micro USB, 3.5mm terminal blocks, and JST connectors. On the software side, FIDI is 100% compatible with SERPENTE. Please note that OMZLO is not affiliated with SERPENTE or its author Arturo182.

The main technical features of the board are:

The pinout of the board is shown below. 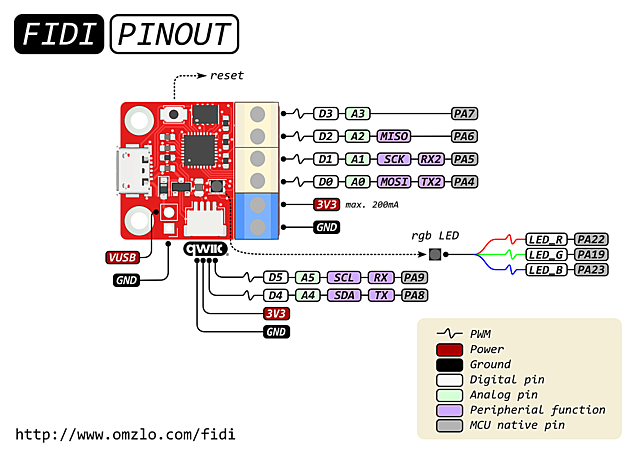 The back of the board is shown here. 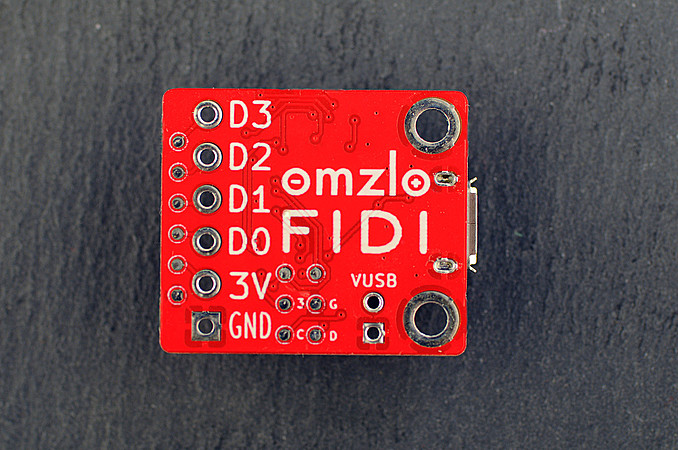 The main differences between FIDI and SERPENTE are summarized in the table below.

SERPENTE can be simultaneously powered by USB and an external power source. However, FIDI should be disconnected from USB when powered by an external source.

Connecting to a computer

When plugged into a computer, FIDI becomes accessible through two USB interfaces:

Programming the FIDI is a simple as editing the file called code.py on the USB drive. The serial interface allows access to debug information and an interactive python shell. More details can be found in Adafruit's excellent CircuitPython guide.

The SERPENTE documentation already describes how to configure the various peripherals available on the board through the GPIOs.

The python board definition provides the following pins:

Since FIDI has only 6 GPIOs, many of these pin definitions are equivalent. For example, board.D5 is the same as board.SCL.

FIDI comes with an RGB LED, where each color component (Red, Green, Blue) is connected to a distinct pin. The 3 LED pins use reverse logic, where HIGH clears an LED, and LOW lights it up. Blinking the green LED is as simple as running the following code:

All pins on the FIDI can do PWM, so the above example can be easily modified to do pulsating LEDs, using the CircuitPython pulseio library.

Consider a simple capacitive moisture sensor that require 3 wires for connection: 3.3V, GND and an analog output to read the soil moisture level.

We will connect the analog output of the sensor to pin A0 of the FIDI. The 3.3V and GND will be supplied by the FIDI on the blue terminal blocks, as shown here. 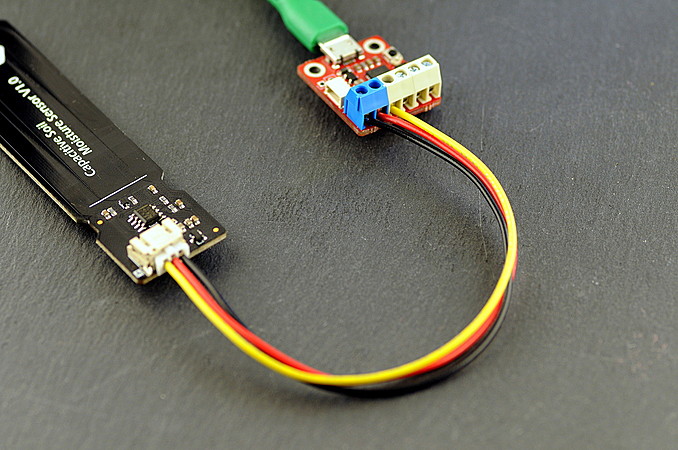 The python code necessary to read the raw analog output of the sensor is very simple.

The output of this program is visible on the USB serial terminal exposed by the board.

Connecting to an I2C BME280 sensor

Let's look at an I2C sensor with the popular qwiic connector like our own BME280 atmospheric sensor breakout. You can plug it directly into the FIDI and quickly test it. 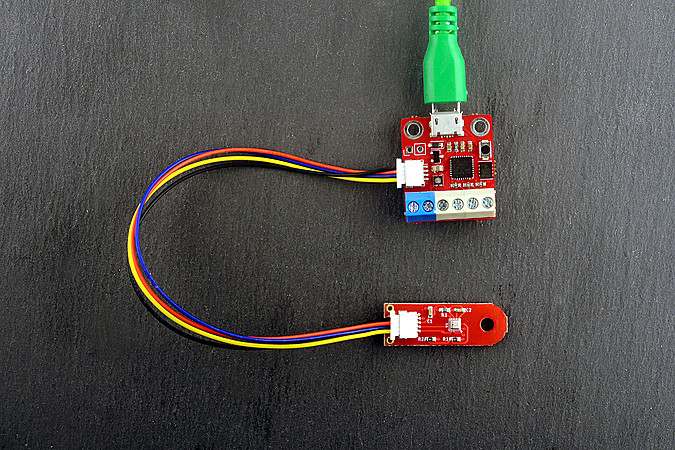 By default, most CircuitPython boards like FIDI don't come with drivers for specific sensors like the BME280. We could take the BME280 datasheet and write I2C code in Python to fetch data from the sensor. But we don't need to do that: Adafruit provides a bundle of libraries for MicroPython that contains a ton of drivers and code to interface with electronics, including the BME280.

Once we get the bundle and unzip it, we need need to do the following:

Now we can retrieve data from the sensor with the following code:

Again, the output of this program is visible on the serial terminal, showing temperature, humidity, and pressure.

Adafruit's bundle of libraries for MicroPython is truly an amazing resource for quick prototyping.

The FIDI board is provided fully assembled except for the 3 terminal blocks that need to be soldered to the board, as shown in the picture below. 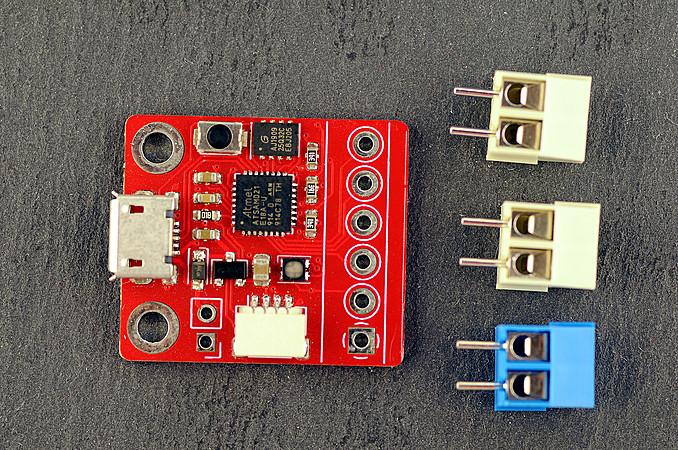 The 3 terminal blocks should be first connected to each other, using the tiny slots on their sides. The blue terminal block should be positioned so as to fit on the bottom lower pins of the board, next to the qwiic connector, as shown on the various pictures above. Once they are connected and perfectly aligned, the terminal blocks can be soldered to the board.

FIDI comes preloaded with CircuitPython 5.0.0, and the uf2 bootloader.

You can buy a FIDI on Tindie now

I really like the FIDI! It’s small size and processing power are a great combination for prototyping.

I made a blog/GitHub entry based on how I used it. Let me know if you want the link (I would post it here, however links are disabled)

9 comments triggered our SPAM filter and will be reviewed before publication.