An Arduino-compatible board with builtin CANbus networking.

The Omzlo CANZERO is an Arduino-compatible board with builtin CANbus networking and designed to be connected to a NoCAN network, enabling the creation of wired IoT applications. 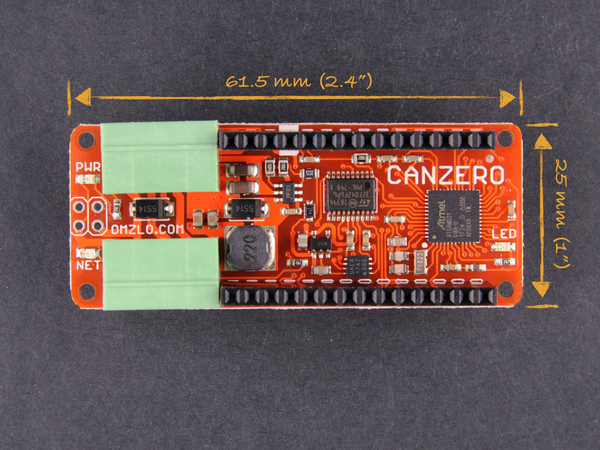 The Omzlo CANZERO is designed to act as an independent node in a NoCAN wired network. Each CANZERO node can be programmed independently and communicate with other nodes in the network, creating applications with multiple sensors and actuators spread over a distance of 300 meters (1000 feet) and more.

At the heart of each CANZERO node is not one but two MCUs:

Both MCUs communicate with each other through SPI as well as through two additional GPIOs. 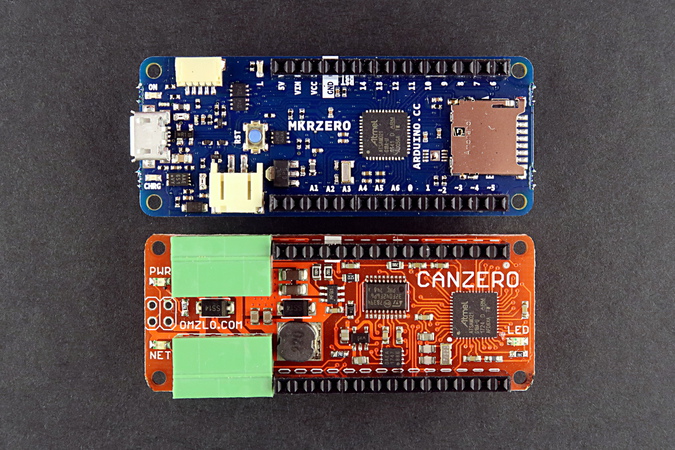 The CANZERO provides two four-pin 3.5mm pluggable headers designed to connect the board to the NoCAN network. However, contrary to the MKR Zero, the CANZERO does not offer an SD card slot, an I2S sound connector or a USB connector.

The main MCU is a SAMD21 which can also be found today on many other Arduino compatible boards. It runs compiled Arduino sketches created by the user. CANZERO "sketches" can be developed in the familiar Arduino IDE and the resulting applications can then be uploaded over the network to any selected node, thanks to a dedicated bootloader burned in the SAMD21 MCU.

The second MCU, an STM32F0, acts as a CAN bus driver, offloading the main MCU from tasks such as network packet buffering and re-assembly. It will also force the main MCU to reset and jump into the bootloader when it receives a specially formed packet. This allows you to recover from blocked applications or program errors, without physical access to the node or without initiating a power-down of the whole network.

Note: All logic on the CANZERO is 3.3V, like the Arduino MKR ZERO or the ESP8266 for example. Level shifting will be necessary to interface with legacy 5V circuits.

The CANZERO board integrates the following components:

The CANbus network runs by default at 125Kbps.

The bottom side of the board provides pin names and connection information.