Automated plant watering with CAN bus 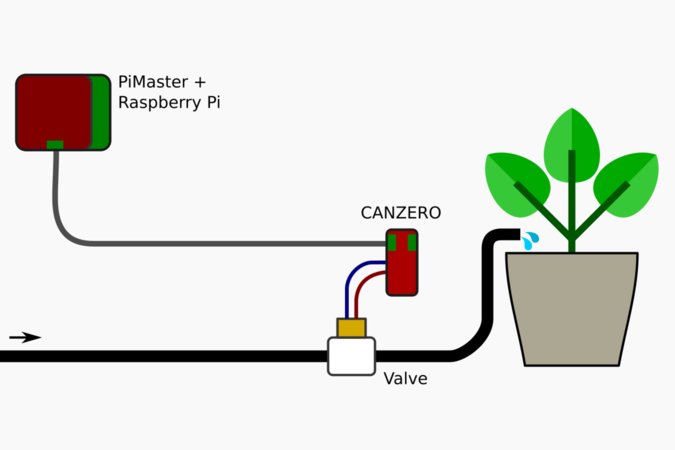 We'll look at building an automated watering system with the Omzlo NoCAN IoT platform, which is based on a set of Arduino-compatible nodes managed by a Raspberry Pi. Our general setup is shown in the figure above:

To keep things simple, we will limit the features described in this project. But it's easy to build on this example to add support for controlling watering with a smartphone or through the MQTT protocol.

There are plenty of types of water valves, using various voltages, latching or non-latching, adapted to different topologies, etc. One of the simplest water valves is the 12V plastic 13mm (1/2") solenoid valve pictured below and that you can find for cheap on Adafruit or on eBay. 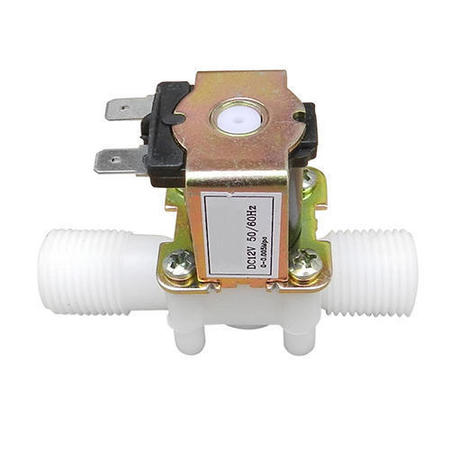 That valve is "normally closed" and when there is no current applied to the solenoid, the valve simply closes stopping the flow of water. It requires a minimum water pressure to operate (0.02 Mpa): without that pressure, the valve won't close well. As such, these valves are not bi-directional: they expect water to flow in a specific direction as noted with an arrow on the plastic body of the valve. While it is rated for 12V, it operates without issue at 9V or even below. A current of 200mA to 300mA is necessary to keep the valve open, letting water flow through.

One of the simplest ways to control this solenoid valve is with a low side (N-channel) Mosfet switch, as illustrated in the figure below. 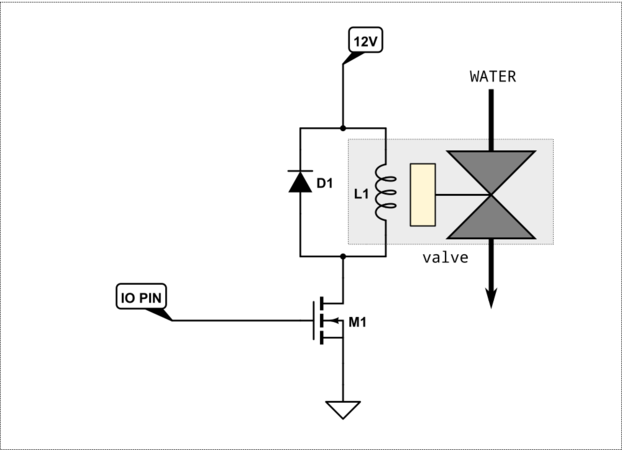 A microcontroller IO pin is used to control the Mosfet M1. When a sufficient voltage is applied to the gate of M1 current flows through the solenoid and opens the valve. Conversely, when the gate voltage goes down to 0, the Mosfet stops allowing current to flow through, thereby closing the solenoid.
The selected Mosfet should be "logic-level compatible" so that the 3.3V volt provided by a microcontroller is enough to fully turn on the Mosfet. As always with an inductive load like a solenoid, a "flyback diode" D1 is added to protect the circuit from voltage spikes. In addition, a weak pull-down resistor (not shown) should be placed between the gate of M1 and GND. This assures that the gate of the M1 is at a predefined state when the micro-controller is not powered on or defective.

A final point to consider is that a 12V power source must supply current to the solenoid.

Our goal is to control our watering system with a CANZERO node in a NoCAN network, allowing us later to program it directly from the command line on a Raspberry-Pi or through a web interface.

NoCAN networks use a single cable to connect a series of nodes together. The cable brings both power and networking (CANbus). A NoCAN network can use any voltage between 6 to 28V, but using 12V or 24V is a classic approach. Since we can build a NoCAN network with 12V, we can make an interesting simplification here: we can power both the solenoid and the network nodes with the same source, simplifying our cabling by avoiding an extra 12V power supply and cable for the solenoid. Note that if your NoCAN network uses long cables with small wires, then the activation of the solenoid will generate current and result in a minor voltage drop due to the resistance of the wire. In most settings, this is not a problem.

With this in mind, the low-side Mosfet switching circuit described above is very easy to build on a breadboard or even on a prototype shield that can be connected to a CANZERO node.

But we are lazy and there is an even simpler solution: using the Omzlo GO-24V shield which is an Arduino MKR compatible shield that is designed to interface a microcontroller with 24V systems (and of course 12V systems). It is pictured below, sitting on top of a classic Arduino MKR-Zero. 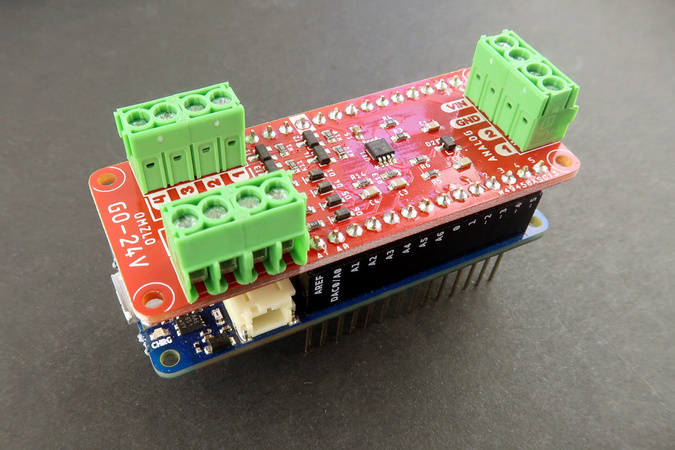 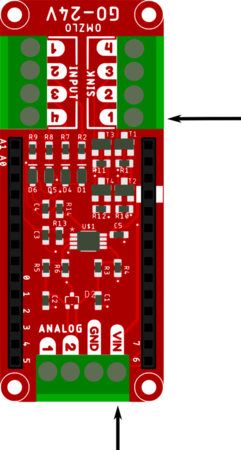 We only need to add the flyback diode and we are done. One simple way to do this is to build the following cable, designed on one side to connect to the shield through terminal blocks and on the other side to the solenoid with female disconnect crimp terminals that fit the solenoid, integrating a 1N4007 diode. The cathode of the diode should be connected to the 12V side, the anode to GND.

The valve, the CANZERO, and the GO-24 shield can then all be placed in a box and connected to the NoCAN network as well as the water pipes. 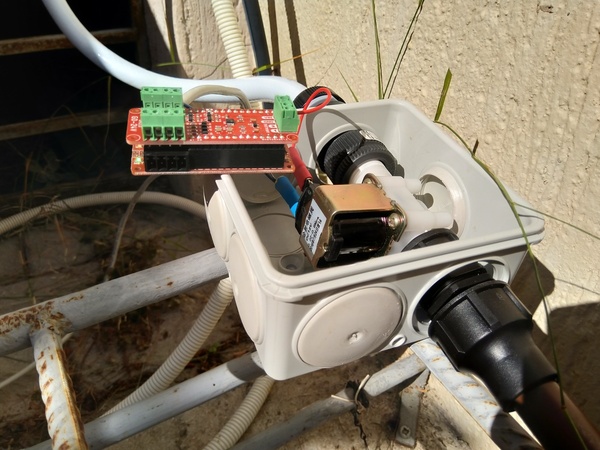 We will create two channels to control our watering system on the CANZERO node:

In addition, these channels will have the following properties:

The gate of the Mosfet controlling the solenoid will be connected to the CANZERO/Arduino pin 0. We will also use the Arduino RTC library for timing purposes, taking advantage of the 32.768K crystal oscillation of the CANZERO.

This provides us the following sketch.

With the latest version of the Arduino IDE, uploading the sketch to the node is easy: simply select the right node in the Tools/Port submenu and click on the "upload" button.

For more details on uploading sketches see the relevant section in our big tutorial.

Our system can be tested either with the web interface or from the command line.

We can also use the builtin web user interface to control the watering system. Log on the Raspberry Pi gateway and launch the web UI, for example with the following command:

Clicking on the channels numbered 0 ("watering/valve") or 3 ("watering/timer") allows controlling the watering system the same way we can do it on the command line.

Notes: our own setup has many channels, including a set of temperature/humidity/pressure channels based on a BME280 sensor.

The NoCAN network is controlled by a Raspberry Pi computer fitted with a PiMaster HAT. This is the perfect location to automate your watering system schedule with just a single line of code!

Linux systems, such as the Raspbian distribution that runs many Raspberry Pi machines, offer a very simple tool to schedule tasks on a regular basis: cron. The Raspberry-Pi website already provides a nice and quick tutorial on cron so we won't go into details here.

Assuming that the nocanc tool has been installed in the /usr/local/bin/nocanc directory and that the watering timer is controlled by the channel named watering/timer, we can program a 10 minute watering session every day at 8:00 AM, using the following entry created with crontab -e:

What happens if we have several nodes each controlling one (or more) valve(s)? Each node would need to create channels with a different name to distinguish the different valves, e.g. "watering1/valve", "watering2/valve", etc. This would mean that we need to write a slightly different version of our sketch for each node, changing the name of the channels in each sketch.

Luckily there is a little trick we can use to simplify our life: if we insert the string $(ID) in a channel name used in NoCAN, that portion of the channel name will be replaced by the actual node id of the CANZERO node creating the channel. As such, in our sketch, we can replace the following line:

If the node creating the channel is node number '6', then the created channel will be watering/6/valve. If 3 different nodes run the same sketch they will, therefore, create 3 channels, each with a different name based on their node identifier. Node identifiers remain constant across restarts of the nocand server, so, for example, we can use the channel watering/6/valve in our crontab script as it will not change.

We only need to write one Arduino sketch and we can deploy it on as many nodes as needed!

To keep things simple, this blog entry provided just a basic but functional watering system based on the NoCAN IoT platform. It's easy to extend it by adding a nice web interface to control and schedule watering operations. You can also connect this system to blynk in order to control plant watering with a smartphone, even if you are far away from your garden!

As a next step, we will try to add a capacitive soil moisture sensor to schedule watering based on the soil humidity. But this is for another blog entry!

7 comments triggered our SPAM filter and will be reviewed before publication.